In today’s economy it is imperative to always stay ahead of everyone else while conducting your business. Data science, and by extension data scientists, have become one of the most wanted professions in the 21st century. Machine learning is one of the branches of data science which can launch you into the upper echelons of decision making. That being said, it still requires a profound understanding of algorithms and statistics.

Machine learning (ML) as a term was a synonym for artificial intelligence (AI) back in 1960’s  but only started to flourish in 1990’s whilst shifting away from AI and its approaches. While being similar to data mining and computational statistics, ML distinguishes itself by using a variety of complex algorithms and models. It achieves that by taking historical data to produce reliable data and find hidden insight within the former.

The best way to learn something is to look at a practical example. Here we have a simple example of the k-nearest-neighbor algorithm. In this example we can input the sepal length and width of an Iris flower into the algorithm and it will determine which Iris flower it is. There are three possible Iris flowers represented in the graph, Iris Setosa, Iris Versicolour and Iris Virginica , matching the colors red, green and blue. The X axis represents sepal length while the Y axis represents sepal width. 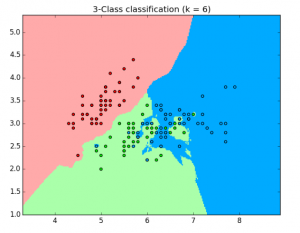 Using data that was provided to the algorithm, the model was able to make three clusters of possible values matching each flower species. If we had an Iris flower and wanted to check what species it was, all we would have to do is measure its sepal length and width and using the resulted predictions we could easily determine which species it was.

Though one would think that machine learning and data science are primarily used in business and finance, they are actually used in plethora of fields such as biology, linguistics, psychology and medicine to detect various patterns and uncover new data. Some of uses for ML might include weather forecasting, population growth prediction, identity fraud detection, image classification, robot navigation, game AI and many more.

We are developers of data visualization software BusinessQ. Try it for free and make reports and dashboards that make sense, without chart junk.

Regression analysis or trend estimation of a series of data points, e.g. observed as a…

KPI is a short term for Key Performance Indicators. “A KPI is a measurable value…

We are happy to inform you that we have published a new version of BusinessQ (v18.0). What is…